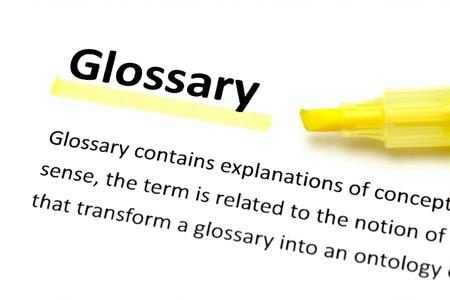 ABATEMENT: A reduction or reprieve from a tax debt or other payment obligation. Sometimes rental contracts will include an abatement clause to protect the lessee (renter) from having to pay full rent if the building is destroyed by fire, flood or is damaged in some other way to the point it cannot be occupied until renovated.

ABSTRACT OF TITLE: A synopsis of the legal history of ownership of real property as well as any liabilities attached to it, such as mortgage liens. A summary of recorded instruments, which affect title, arranged in the order of recordings. This abstract will sow a “chain of title” recording ownership from person to person over time.

AMEND: – re-filing a tax return due to a modification in filing status, blunder in stated income, or neglected deductions or credits.

AMORTIZATION: A method of paying off the principal amount of a debt over time. Each payment made reduces the amount owed.

AUDIT – in-depth investigation conducted by the Internal Revenue Service (IRS) where supplementary evidence needs to be acquired concerning an individual’s or business’s fiscal records or systems.

BANKRUPTCY: Proceedings against a debtor who has been declared legally insolvent. The assets and property of the debtor is distributed among the creditors (the lenders) to pay off as much debt as possible.

DEDUCTION– lessening in taxable income, based off of various criteria, which may lessen an individual’s tax liability.

DEPENDENT – for income tax purposes, a person that relies on a taxpayer for more than half of their financial support and whom a taxpayer can claim on their taxes.

ESCROW – functions as an account to pay taxes and insurance. The homeowner pays into the account that is held by the lender.

ESTIMATED TAXES PAID – taxes paid on quantities reported on the taxpayer’s tax return that are not subject to withholding, such as self-employment, interest, and alimony. Projected tax may also have to be paid if the amount of income tax withheld from the taxpayer’s salary, pension, or other income is inadequate.

FAIR HOUSING AMENDMENTS: The Fair Housing Amendments make it unlawful to discriminate in residential housing transactions against any person because of family status or handicap. However, the law provides exception for certain age-restricted communities which meet the definition provided in the law for “housing for older persons”

FAIR MARKET VALUE: The appraised value of a property as compared with other properties in the same neighborhood. The fair market value is a relative number each appraiser will likely arrive at a different value number.

FOREBERANCE: The act of refraining from taking legal action despite the fact that a mortgage is in arrears. It is usually granted when a mortgagor makes a satisfactory arrangement by which the arrears will be paid at a future date.

FORECLOSURE: The legal procedure whereby the note holder is able to force the sale of a property to recoup its debt. This is a legislative process and the various steps of this process have been very clearly specified by statue.

FORM 656 – form completed and presented to the IRS by a taxpayer that wishes to apply for an offer in compromise.

FORM 1040X – form that must be completed by a taxpayer and presented to the IRS in order to make changes to a submitted tax return.
FORM 1098 – manuscript received by a taxpayer from a lending bank that is reporting mortgage interest of $600 or more that the taxpayer paid during the fiscal year.

FORM 1099-B – manuscript received by a taxpayer that is distributed from a broker, Investment Fund Company or other financial institution that reports the sale of stocks, bonds, mutual funds, and or other securities.

FORM 1099-G – manuscript sent to a taxpayer by federal, state, or local governments stating the amount of total taxable unemployment compensation for which the taxpayer is responsible. It may also be used to report state and local income tax refunds and other payments.

FORM 1099-INT – manuscript received by a taxpayer that reports interest paid and is sent by the person or entity to which the interest was paid.

FORM 1099-MISC – manuscript that must be filed and submitted to the IRS for each person to whom a taxpayer has paid at least $10 in royalties or broker payments in lieu of dividends or tax-exempt interest; at least $600 in rents, services (including parts and materials), prizes and awards, other income payments, medical and health care payments, and crop insurance proceeds.

FORM HUD-1 Settlement Statement – the official statement of the U. S. Department of Housing and Urban Development that details all closing costs paid by the buyer and seller. This is completed by the settlement agent and both the buyer and seller must sign it at closing.

FORM SSA-1099 – manuscript that reports any Social Security benefits that a taxpayer has received during the year.

HOMESTEAD ESTATE: In some states, the home and property occupied by an owner are protected by a law up to a certain amount from attachment and sale for the claims of the creditors.

HOMESTEAD EXEMPTION: Described in various ways by individual states, it allows for protection of the homeowner from loosing their house to certain types of consumer debt creditors. In some states the owner must declare their house a homestead with the government.

HOMESTEAD TAX EXEMPTION: The credit against taxes given in some states to a person who owns and occupies a dwelling and to certain other individuals including disabled veterans, widows, handicapped and those over age 65.

IMPROVEMENTS – For tax purposes, improvements to a dwelling are home expenditures that prolong the life of your home, such as the cost of complete roof replacement.

INVOLUNTARY CONVERSION: The disposition of property as a result of casualty, theft, or condemnation. Upon conversion, cash is usually received from insurance proceeds or condemnation awards.

JOINT TENANCY: Ownership of real estate by two or more persons, each with a specified ownership in the property. Either partner is free to sell or put a lien against their portion of the ownership without the consent of the other but in the case of the death of one of the partners, ownership will automatically pass to the surviving partner.

JOINT VENTURE: An association between two or more parties to own or develop real estate. It may take a variety of legal forms including partnership, tenancy in common, or a corporation. It is formed for a specific purpose and duration and to spread the risk of the investment among more than one party.

JOINTLY AND SEVERALLY: A legal term indicating that a contract has been entered into by two parties and that the two parties are not only liable together by individually as well. If an investor were to partner with another investor in the purchase of the property, the two investors would both be responsible for the whole debt (jointly) but in the event on of the partners did not nor could not make payment, the full debt would pass to the other, solvent partner (severally).

JUDGMENT: The verdict of a court on a matter presented to it. A money judgment dictates that a party must make payments to another to settle a claim. Judgments can allow a creditor (to whom money is owed) force payment of judgment through wage garnishing and other methods.

JUDGMENT LIEN: A lien upon the property of a debtor resulting from the decree of a court as a result of a judgment awarded against the homeowner.

JUDICIAL FORECLOSURE: A type of foreclosure proceeding used in some states that is handled as a civil lawsuit and conducted entirely under auspices of a court.

MARRIED FILING JOINTLY – filing status that can be used by couples who are legally married at the end of the tax year. The taxpayers account for total income, exemptions, deductions, and credits of both spouses on a single return. Married couples using this status must not be legally separated, have a final divorce decree, or decree of separate maintenance.

NON-TAXABLE INCOME EARNED – Income not taxable according to the Internal Revenue Service. A few examples of nontaxable income are life insurance money and definite veteran’s benefits.

OFFER IN COMPROMISE – authorizes a taxpayer to settle a tax debt with the IRS for less than the full amount owed and is usually an option when a tax liability cannot be paid in full or creates financial adversity for the taxpayer.

POINTS – funding responsibilities at closing by lender in increments of 1 per cent of the mortgage amount. They may also be listed as loan origination fees or loan reductions and may be deductible on a tax return.

REPAIRS – For tax purposes, expenditures to maintain a home, such as texturing and painting the interior walls.

RETIREMENT SAVINGS CONTRIBUTION AND CREDIT – a non-refundable tax credit accessible to eligible individuals who fund an employer-sponsored retirement plan or to a traditional IRA.

SALE OF BUSINESS ASSETS – articles of a business are sold to establish a gain or loss.

SCHEDULE C – manuscript used to report income or loss from a business that an individual operated or a profession that the individual practiced as a sole proprietor.

SELF-EMPLOYED EXSPENSES AND INCOME – money that is made and expenses that are incurred by an individual who works for himself or herself rather than earning wages from an employer.

SHORT-SALE – different to foreclosure; sale of property on which there is debt and can no longer be afforded by property owner who settles to repay less than full amount owed on the property.

SUBSTITUTE RETURN – a tax return filed by the IRS on a taxpayer’s behalf if the taxpayer does not file a tax return on their own.

TAXABLE INCOME EARNED – income that is subject to income tax or being taxed by the IRS, such as employee wages, jury duty fees, and rental property income.

W-4 – manuscript completed by an employee to be given to an employer to ensure that correct federal income tax is deducted from the employee’s compensation.

W-9 - manuscript issued to an individual by a payer of 1099 labor that contains the individual’s address, social security number, and signature.